How to Restore Local Control of Public Schools in Washington State

Despite the fact that the Washington State Constitution includes several sections to protect local control over public schools, the past 20 years has seen corrupt politicians in Olympia increasingly tighten their draconian policies over our public schools. These insane policies have gone way beyond imposing “Sex Ed for Kinders”, promoting “Racial Division” and allowing boys to enter girls bathrooms and compete in girls sports. The past two years as seen corrupt Olympia politicians shut down all schools across our state - harming the development of over one million children - despite the fact that no students were ill and despite the fact that children lack the ACE 2 receptors needed to catch or transmit the corona virus. Even when schools reopened, children were required to wear masks for an entire year – despite the fact that masks have never been shown to stop any virus. Olympia politicians even had the audacity to require that teachers take experimental clot shots – violating their God given right to medical freedom – firing thousands of highly qualified teachers – and leading to the current teacher shortage crisis here in Washington state.

During this time, I spoke at numerous school board meetings to ask school board members to defy these state-imposed draconian policies. I pointed to sections of our State Constitution that prohibited Olympia from controlling local schools.

Sadly, school board members - as well as parents and teachers – seem to be completely unaware of the history or meaning of our state constitution. Therefore, in order to help parents, teachers and school board members better understand what it means to be a “local control” state, we will take a trip down memory lane back to 1889 and the drafting of the Washington state constitution. 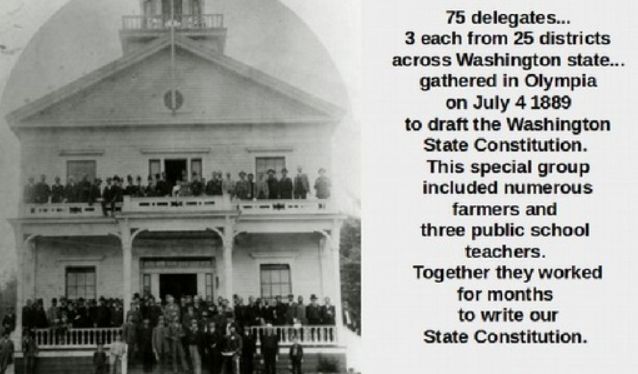 There are at least 5 major differences between the Washington State Constitution and most other state constitutions:

#1 The Washington State Constitution has a section specifically prohibiting the legislature from enacting special laws that would interfere with other branches of government. (Article 2, Section 28)

#3 A clause granting the Superintendent of Public Instruction “supervision” over all matters related to the public schools. (Article 3, Section 22).

#4 A clause making the ample funding of schools the duty of the state.

# 5 A clause requiring the legislature to provide for a uniform system of public schools.

In this report, we will examine why each of these 5 clauses were written into the Washington State Constitution.

#1 The Washington State constitution specifically prohibits the legislature from enacting special laws that would interfere with the management of public schools (Article 2, Section 28)
Article 2, Section 28 of our State Constitution includes 18 areas where the legislature is prohibited from passing special laws. These 18 areas include two that are the duties of the Superintendent of Public Instruction:
"The legislature is prohibited from enacting any private or special laws in the following cases…
#7 For authorizing the apportionment of any part of the school fund.
#15 Providing for the management of common schools." 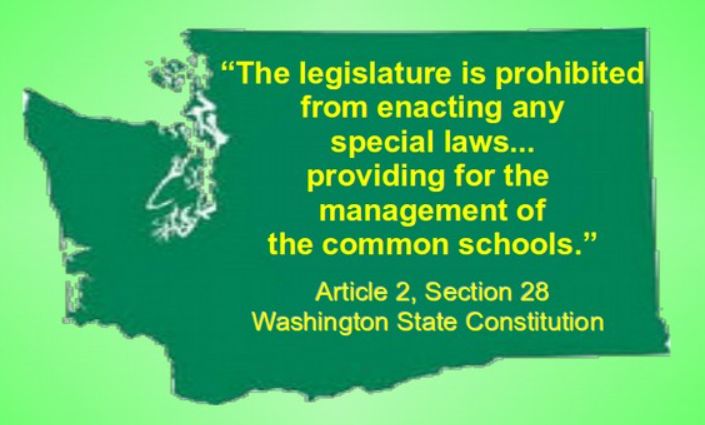 The reason the drafters of our constitution did not want the legislature passing special laws regarding the management of our schools is because they feared legislators would pass laws that harmed rather than helped schools. This is exactly what has happened in the past 20 years - with the legislature passing hundreds of unfunded mandates that have created a bureaucratic nightmare of oppressive regulations hated by parents.

Obviously, the hundreds of laws passed by the legislature to impose their will on local schools - and emergency proclamations made by the governor - are all gross violations of Article 3, Section 22.

#2 More independently elected state officials than any other state including an independently elected Superintendent of Public Instruction - elected directly by the people rather than being appointed by the Governor. (Article 3, Section 1).
While most states have only 4 or 5 statewide elected officials - with the remaining positions appointed by the Governor - the drafters of our state constitution feared that this would give a corrupt Governor and legislature too much power. The solution was to have 8 state officers independently elected directly by the voters. No other state retains this much power directly in the hands of the people.

#3 A clause granting the Superintendent of Public Instruction supervision over all matters related to the public schools. (Article 3, Section 22).
In addition, to take power away from the Governor and the legislature, the following was written into Article 3, Section 22: "The Superintendent of Public Instruction shall have supervision over all matters pertaining to public schools."

In an identical way, the drafters of our state constitution wanted an independently elected Superintendent of Public Instruction to manage – but not set policies for - all the school districts in Washington state. The primary job of the State Superintendent was to distribute funds to local school districts in a uniform manner as well as to insure that we had a “uniform” system of public schools (not rich schools versus poor schools).

The drafters of our state constitution would have been appalled that either the governor or State Superintendent of Public Schools would issue an order shutting down every school district in the state – without a vote of the local school board! Indeed, when their was a previous flu epidemic in 1918, only a few school districts shut down. In every case, it was only AFTER a vote of the local school board. And in every case, schools were only closed for a few weeks – not for several months!

#4 A clause making the ample funding of schools the duty of the state (rather than the duty of property owners in each local school district).
Article 9, Section 1 states: "It is the paramount duty of the state to make ample provision for the education of all children residing within its borders, without distinction or preference on account of race, color, caste, or sex."
Notice the word “state.” As we discuss more below, the drafters of our state constitution wanted to avoid a system of wealthy school districts and poor school districts. They had agreed that the best way to achieve this goal was to impose a uniform one percent annual state tax on all property. The plan was that the more wealthy urban areas of the state – with high property values – would help pay for the schools in rural areas of the state that had lower property values. This way, every child in the state would have an equal opportunity for a quality education.

This is why in the past, the state would pay for up to 90 percent of the cost of building new schools. Local levies and local bonds that create a difference between schools of more than 10 percent were ruled by the Washington Supreme Court to be unconstitutional as far back as the 1970s. Sadly, this uniform system has been completely replaced by corrupt politicians who transferred the burden for school funding from the state onto the backs of local homeowners – leading to a dramatic rise in local property taxes during the past 20 years. This is why we now have rich school districts that can pass bonds and levies and poor districts that can’t.

Conclusion
Viewed as a whole, the Washington state constitution requires state funding of public schools but local control over the policies of local public schools. Instead corrupt Olympia politicians have done just the opposite. They have insisted on State control of our schools while transferring the tax burden onto the backs of local home owners.

As always, I look forward to your questions and comments.